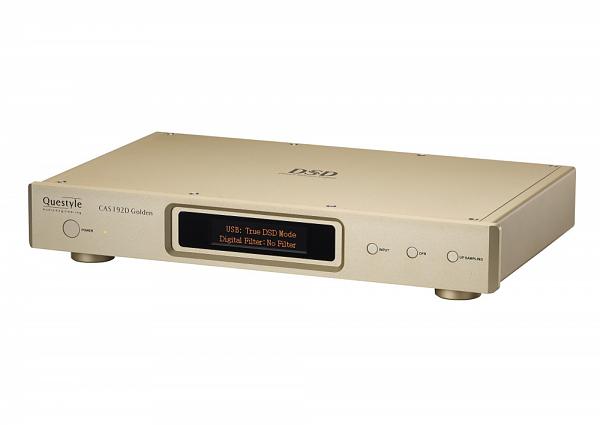 A fantastic combination of sound and digital technology!

The Questyle Audio CAS192D 'Golden Series' takes all the great technology found in the standard version but adds Roberts ceramic PCBs, for ultra-low signal loss and extremely stable transmission, bringing the performance of this DAC to entirely new levels.

Unlike other DACs that claim DSD support, yet in actuality provide DoP (DSD over PCM), the Questyle Audio CAS192D accepts the DSD bit-stream directly from your computer, bypassing your computer’s audio processing and digital volume control as well as the Questyle Audio CAS192D’s digital filters, to provide True DSD, the way it was meant to be heard.

The Questyle Audio CAS192D achieves this without requiring expensive, difficult to install, proprietary connectors, or as is the case with DoP, breaking up the bit-stream into 16bit packets and compressing them into a PCM data-stream and then uncompressing them at the other end, buffering them, then reassembling the bit-stream so that it may be sent to the DAC as DSD. All of this requires an extreme amount of processing, at both the computer end and the DAC end, to perform in real time (which invariably leads to latency, data loss, etc), not to mention a 33% increase in bandwidth requirements for the USB ports and cabling.

Currently the majority of DACs use FIR (finite impulse response) digital filters, but research and testing has shown that our ears are very sensitive to the pre-ring that FIR digital filters add to the impulse wave, making the music sound incoherent and unnatural.

During every second of music, there are hundreds of thousands of time operations. Any micro errors will distort the sound.

When up-sampling, 44.1kHz does not divide evenly into 192kHz, causing timing errors. To avoid this, the CAS192D uses two clocks, with extremely low phase noise, thus the processor automatically identifies the sample rate and up-samples integrally. If the input data is 44.1kHz, it will be multiplied by 4 to 176.4kHz; if the input data is 48k, it will be multiplied by 4 to 192k, which avoids those negative effects. The up-sampling is ASRC to avoid jitter.

On the front panel of the Questyle Audio CAS192D, there is an UP-SAMPLING button to allow the user to choose whether to up-sample or decode at the original sample rate (the current state of operation is displayed on the screen).

The sound of WM8741 can be described as classic "English"-style, delivering a soft and exquisite sound. Due to Questyle's high requirements for D/A design, LPF is discarded (per Wolfson ’s suggestion) in the Questyle developed analogue output circuit for the WM8741, receiving official praise from Wolfson.