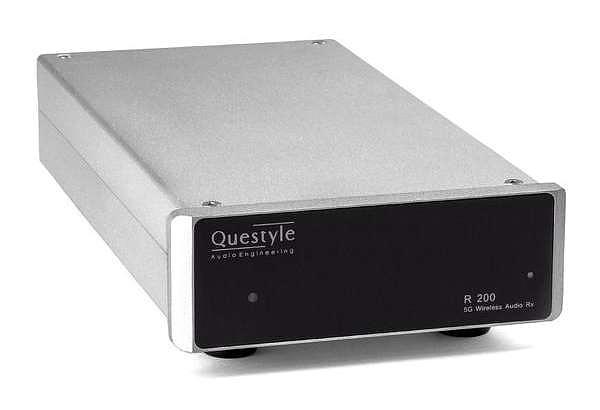 Current 2.4GHz wireless audio systems set people free from unsightly and impractical cable connections, but there is an obvious shortcoming, in that, there are countless Wi-Fi setups, broadcasting in the 2.4GHz frequency range, which repeatedly cause interrupted, delayed or weakened signal. To achieve absolutely stable wireless transmission, Questyle Audio innovatively designed the 5GHz wireless system, transmitting audio signals in the 5.2GHz/5.8GHz frequency band, wonderfully avoiding the crowded 2.4GHz frequency range and achieving the most stable transmission to date.

Most importantly, the Questyle Audio 5GHz Wireless Audio System supports a stable real time playback, which is beyond the capability of other wireless systems.

Because multiple receivers are supported, up to 8 receivers per T2 transmitter, with only an 8ms delay, speaker systems requiring more than 200W output power, can easily be accommodated through a bi-amp or tri-amp configuration.

There are many speakers that have separate connections for high, mid and low frequency. To upgrade the sound performance, two or three pairs of R200 amplifiers can be used to separately drive HF, MF and LF. The power of each channel increases to 400W(2*200W) or 600W(3*200W) to improve hi-end performance.

Multi-channel surround home theater set up can be simplified by using the Questyle Audio 5GHz Wireless Audio System to power surround and rear channels, without having to run wires. This is especially helpful in finished rooms where it is not practical or even possible to run wires through the wall or under the floor. Plus, since transmission is done in the digital domain, there is none of the signal denigration or power loss, usually associated with long speaker wire or interconnect runs.